PowerManagement covers everything that has to do with influencing the inverters on the part of the energy suppliers.

In the EnergyMaster, respectively e.manager you can deactivate the ports (RS485 1, LAN, etc.) on which no PowerManagement should be performed on the local web page of the device under Configuration = > Advanced Settings.
At all other interfaces the signals are passed on to the inverters for control (power reduction)!

You can realize the power reduction to 0, 30, 60 or 100% via the digital and the analog inputs.
The e.manager offers two different setting options.
Make sure that only one of the two settings is active at any time.

With the "Expert setting" you can combine different switching states, so that a power reduction occurs if e.g. two specific inputs are activated at the same time and not only one.

Set the desired input to digital under Configuration = > Configure devices. Assign a unique name, e.g. K1, K2, ...
You can use both the digital inputs and the analog inputs for this purpose.

If you use digital and analog inputs, make sure that they work with different potentials and must therefore be wired separately.

Under Configuration => Power reduction you will now find the activated inputs. Now you can enter up to 10 variants with corresponding percentages.

Check the settings by setting a jumper.

If you operate a PV system with the 70% control, you can increase here a dynamic readjustment of the inverters and an additional increase in self-consumption by connecting consumers. 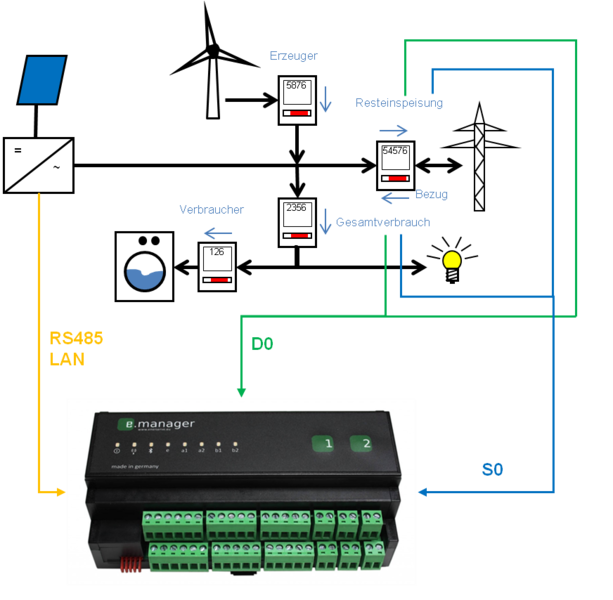 The residual feed meter or the total consumption meter can be connected via the S0 or D0 interface. You get the best accuracy and updating via D0 counters.

Under Configuration => Configure devices, you must specify the connected DC power for each inverter.
Under Self-consumption => Settings you activate the 70% control and specify the maximum AC power that may be fed in.
In this case, the inverters are permanently set to 70% of the maximum power.
Of course, you can also select any other percentage.

For a control of the PV power, the inverters must be connected to the e.manager via RS485 or LAN and also have the possibility to be controlled steplessly. Prerequisite for a control is the appropriate firmware of the inverters, as well as the implementation of the inverter manufacturer in e.manager. A list can be found on the following page (supported inverters).

When readjusting, the maximum possible inverter power is increased when the inverter power has reached the current maximum power and the fed-in power is below 70%.
Simplified: A 10 kW system feeds in 7 kW (70%).
If there is now the possibility that in-house consumers can use the remaining 3 kW, the inverters receive the command to produce more power, since this excess power is not fed into the public grid.
The increase of the power depends on the current solar irradiation and therefore on the current maximum producible power of the inverters, as well as on the energy consumption of the consumers. 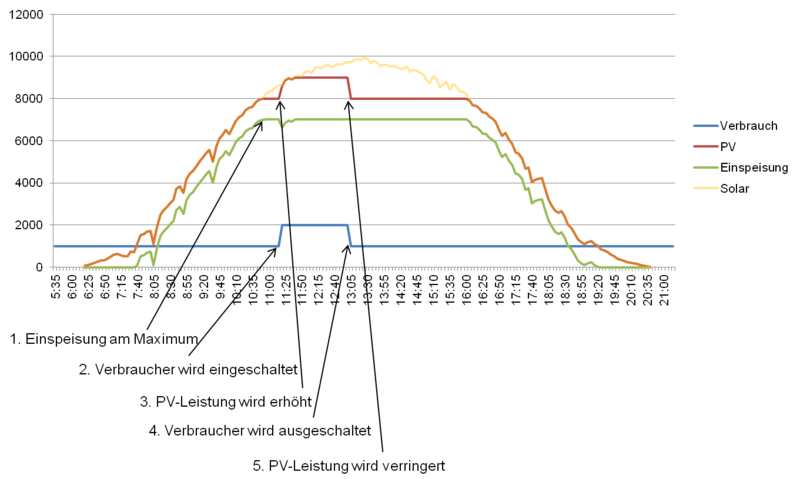 The e.manager permanently checks if the fed-in power is higher than 70%. In this case an immediate power reduction would take place. A possible increase of the maximum power is checked every minute. Depending on the update interval of the individual measured variables, an excessive power is usually reduced within 10 seconds.

If a power reduction is to be realized due to grid limitations, there may be an increased grid load for the time until the inverters are regulated down.

For a few seconds a much too high power is fed in, which could overload the grid.