The Internet portal has a fault detection function that is independent of the inverter manufacturer.
Various types of error detection are available.

The settings can be found in the portal under Configuration = > Error detection.

CONSIDER ALIGNMENT
If you want to take the alignment into account, you have to set the azimuth in the inverter configuration the azimuth and the tilt.

For error detection you must specify the parameters here. 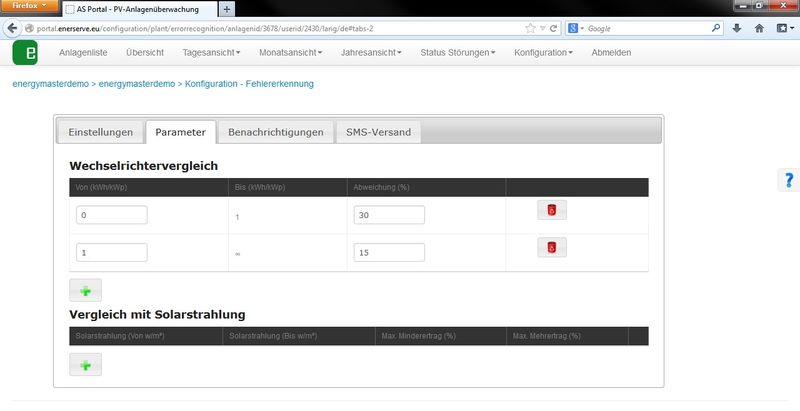 INVERTER COMPARISON
Here you can specify the maximum deviation in %  depending on the relative power.

1. Parameter
The comparison should only be executed if the relative yield is between 0 and 1 kWh/kWp!

The comparison should only be executed, from a  relative yield of 1 kWh/kWp!
Tip:
Don't know what percentage to set, then run the system for a few days to see what might be reasonable and then calculate what the default deviation should be in your system.
COMPARISON WITH SOLAR RADIATION
You can set the parameters in the same way as for the inverter comparison.

You can specify several e-mail addresses to which the error messages are to be sent.
The inverters that have an error are listed in the e-mail.

Once a day you will receive a free SMS in case of an error.
This SMS only indicates that error messages have occurred at the plant.
Please read the exact error messages in your e-mails or online in the portal.

e.g. international code 0049 for Germany. The zero of the area code is omitted.
Please enter only numbers, NO + / - or spaces
If you do not enter your cell phone number in the format as shown here, then no SMS notification can be sent!